Welcome to the Unbroken Wiki. Our subject covers the ever-expanding and changing world (by which we mean universe[s]) of Unbroken: a modern-day science fiction epic!

Disclaimer: The Unbroken lore is a work in progress. All information on this wiki is subject to change.

The Unbroken Wiki is the only online database over the upcoming work of fiction. It is also ran by the authors, so everything on this website is official. Anonymous editing has been disabled outright as of 11-4-15, and any edits you make to a page are subject to change--especially if you are not an author of Unbroken.

For full info on the story, see the official wiki page.

Unbroken follows the misadventures of a bunch of alien freakshows. Mainly taking place on the revitalized wasp-monster homeworld of Namine, the story centers on the carrying theme of resilience as the main characters struggle against terrorists, other aliens, gods, rogue military dictatorships, parasitic mushrooms, virulent mutagens, non-virulent mutagens, inter-dimensional horrors from beyond our own plane of existence, dragons, drugs, indigenous peoples, religious whackos, clever salesmen, rats, each other, and, most deadly of all, themselves.

The Quote Gallery segment displays quotes from the Unbroken lore that have proven to be interesting.

The Interesting Facts segment displays a few interesting facts about the Unbroken lore. Who would have guessed?

Did you know that... 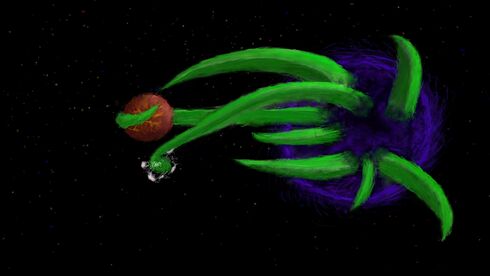 The current featured image is Tdott123's stunning concept art of the Chalidrytes!

Retrieved from "https://ogzmcunbroken.fandom.com/wiki/Unbroken_Wiki?oldid=7693"
Community content is available under CC-BY-SA unless otherwise noted.